Start a Wiki
Encyclopedia Gameria has taken over social media! You can also catch us there for Quackers news!

User of the Month

PatrickFan1 joined Encyclopedia Quackeria on January 7, 2015 and has since made 0 edits. PatrickFan1 was nominated by Nicko756 on July 18, 2015

"PatrickFan1 joined ESB on January 7, 2015, was promoted to rollback on May 13, 2015, and has over 950 edits. He is active, friendly, and tells the community if there are any SpongeBob news updates."

Nominations are open! Click here to nominate someone and participate in the discussions! 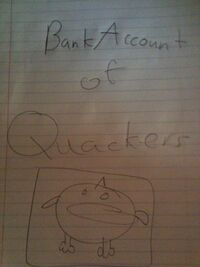 Want to edit this wiki? All you have to do is create an account! It's that easy!

Retrieved from "https://newandimprovedmilkandquackersshow.fandom.com/wiki/Encyclopedia_Quackeria?oldid=7577"
Community content is available under CC-BY-SA unless otherwise noted.